My book about sabertoothed predators is a bit closer to publication. With final text and illustrations submitted some time ago, the volume is now in production at Indiana University Press. The working title now is “Sabertooth”, simple but effective.

Meanwhile, I am working with my colleagues at “The Fly Factory” in the production of a documentary film titled “Bringing the Sabertooths Back to life”. It shows how science and art are combined for the purpose of creating reconstructions of extinct animals such as the sabertooths, and in part it works as a “making of” for the book, but it certainly is more than that. The film will be finished in 2013 and should be available as a DVD at about the same time as the book comes out.

You can see a trailer of the film in the following link: 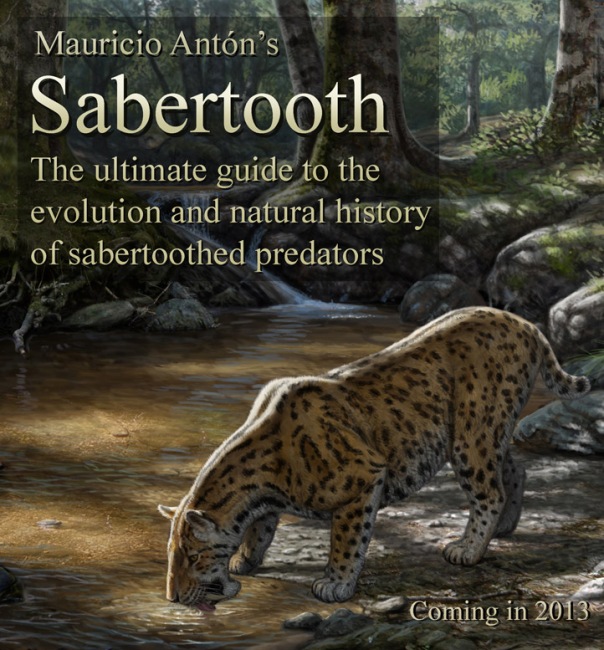 An image form the upcoming book “Sabertooth” by Mauricio Anton.

For those who have shown interest in getting a copy of the Sansan monograph, at this point I think the only way to get it is through a direct order to the Museum Natiojnal d’Histoire Naturelle, Paris. I am attaching the order form. 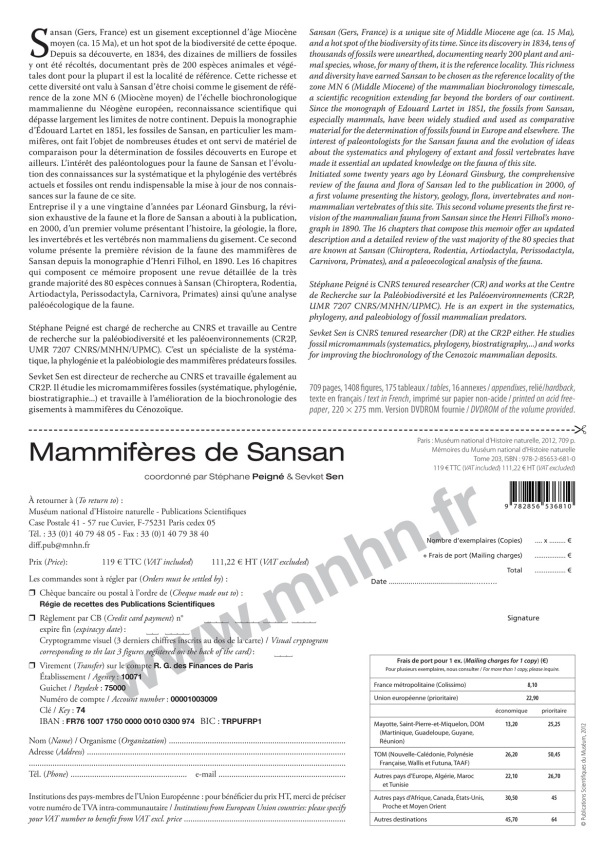 Information about the Sansan monograph, plus the order form.

to this post as an image file, you can download the file and print if you wish. I suppose the volume will be available from different venues in the future.

When I was a young boy looking for any information about sabertooths, I came across the name Sansanosmilus a couple of times. It took me some time to find a publication where this exotic-sounding creature was at all figured, and then all I found was an outline drawing of a skull, not especially impressive by the way, with rather smallish upper canines. Many years later I finally got access to a monograph by French paleontologist Leonard Ginsburg, where the fossil remains of this Miocene sabertooth from France were described and figured.  I discovered that, in spite of its moderate “sabers”, this leopard-sized carnivore was a serious predator, with robust, strong limbs, and a very sophisticated skull. In fact, its adaptations for the specialized killing bite tyipical of sabertooths went beyond those seen in more spectacular sabertooth species that lived millions of years later. This animal was also an evolutionary “grandparent” of the genus Barbourofelis, which inlcuded some of the most powerful and bizarre sabertooths of the American Miocene.

Later on, I had the privilege to meet Leonard Ginsburg himself, who provided me with unpublished photographs and other  information about Sansanosmilus.  All that material allowed me to attempt a life reconstruction of the animal under Leonard’s advice, which resulted in a picture of a strange and stocky predator, only vaguely cat-like.

Around those years Leonard undertook the task of editing a huge monograph that would put together the knowledge ammased after many decades of excavations of the amazing fossil site that gave its name to that strange little sabertooth: Sansan. The first volume, dealing with the history and geology of the site, and the fossil record of plants, invertebrates and non-mammalian vertebrates was published in 2000. But the volume most dear to Leonard, the one dealing with the mammalian fossils, proved more complicated to put together, and he sadly passed away before the task was complete.

More recently, my friend the French paleontologist Stephane Peigné teamed up with Sevket Sen to finish the work that Ginsburg had started all those years ago, and now the monograph is finally completed and ready for publication. It also has given me the opportunity to create an updated anatomical reconstruction of Sansanosmilus, which appears in the cover of the upcoming volume.

The volume is published by the Museum National d’Histoire Naturelle of Paris and will be available as a hardback book and DVD/ROM version. 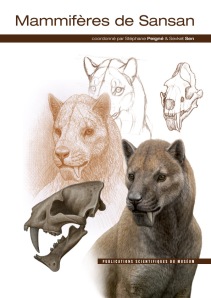 Reconstruction of the sabertooth Sansanosmilus palmidens, cover for the Sansan fossil mammal monograph.