← Run, wolf, Run!
Wolves from the past: living with sabertooths →

Paleoart, (at least professional paleoart) is largely an educational activity. We paleoartists are expected to show to the public, lay and specialist alike, what science knows about extinct animals. So we are very much supposed to keep our creatures behaving properly, and showing the kind of activities they were most likely to engage in. The science of paleontology has to live with enough uncertainties without us further confusing our viewers by showing unlikey behaviors in our paleo-scenes.
But when you spend some time out in the wild observing free-ranging animals, you are apt to see them doing things that defy your understanding. In fact, much of the excitement of watching wildlife is how the real animals keep forcing us to expand the limits of what we think they can or should do.
These days I was looking at some pictures from our 2006 safari to Kenya, and I found an unusual sequence of secretary bird photos. Secretary birds are supposed to walk in the savannah, alone or in pairs, scanning the grasslands for prey such as insects and small (and sometimes not so small) vertebrates. Most times I have seen them that is exactly what they were doing. But on that particular day in the Maasai Mara, a group of vultures were enjoying the last scraps of a carcass when a secretary bird entered the stage and began chasing and pestering the vultures for no apparent reason. The action continued for some time, and the more we saw it the less we understood what was happening.

The naughty secretary bird launches its attack on the unsuspecting vultures 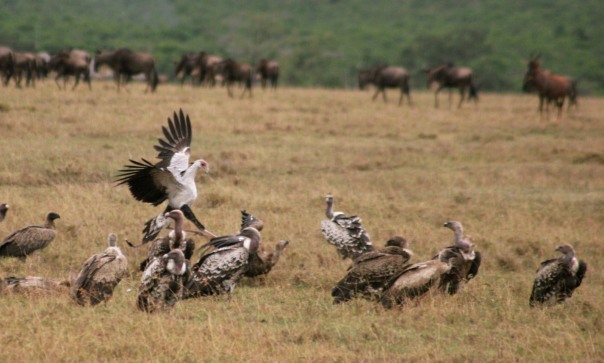 It keeps fighting them, much as a jackal would do!

Not even in the air are the carrion birds free from the assault!

At no time did the secretary bird show any interest on the carrion, nor was there any evidence that it had a nest nearby which it would need to protect. All in all, it gave us a nice show of its antics, but its ultimate motivations remained a mystery.
You can only imagine that prehistoric animals would be doing wonderfully surprising things quite often as well. As a paleoartist I have always forced myself to stick to the most statistically probable behaviors, just as my reconstructions have always been anatomically conservative. But that doesn’t mean I am not aware that life is, by its very essence, always surprising!
Being able to be a witness to such amazing scenes is another of the reasons ‪#‎WhyILoveKenya‬

← Run, wolf, Run!
Wolves from the past: living with sabertooths →