¡La conferencia es hoy! ¡The talk is this evening! 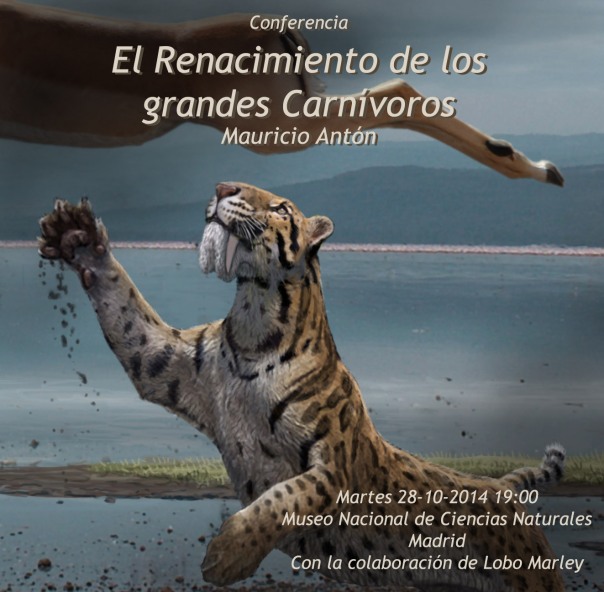 Giant dogs of the past – Cánidos gigantes del pasado

Today, the wolf is the largest of wild canids. But some 8 million years ago there was a dog species that would have dwarfed any wolf. Epicyon heydeni was as large as a lion, and it sported jaws armed with massive premolar teeth and as powerful as those of a hyena, which could crush the bones of its prey almost effortlessly.
Knowing the fossil record of our large carnivores, and fleshing out the bones of the extinct members of their lineages, allows us to see the living species with new eyes. In my conference in Madrid on the 28th we will get to know some of these magnificent predators from the past. 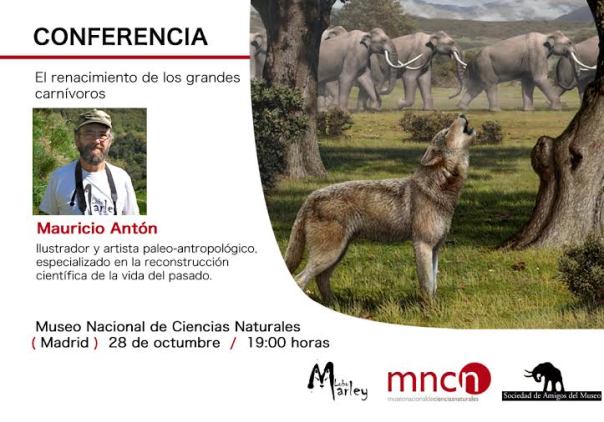 Chalicotheres were arguably the oddest of the herbivore mammals we could come across during a time-travel safari to the Miocene of Madrid. Many other animals would look vaguely familiar to us, from horse-like, rhino like and deer-like herbivores, to the elephant-like mastodons. But there is simply no living mammal to which we can compare the chalicotheres, members of the extinct family Chalicotheridae. They were perissodactyls, and thus related to living horses, rhinos and tapirs. But unlike them, chalicotheres had claws instead of hooves, and their body proportions were unique, with forelimbs disproportionately longer than the hind limbs.
Perhaps the strangest of all members of this strange family was Anisodon grande (previously known as Chalicotherium grande). Only a phalanx -fortunately an unmistakable bone- of this animal has been found in Madrid, but complete skeletons are known from fossil sites in France and Slovakia. Those skeletons reveal the striking adaptations of an animal that looked like no other.

Here is a life reconstruction of Anisodon grande, showing its strange “knucle walk” 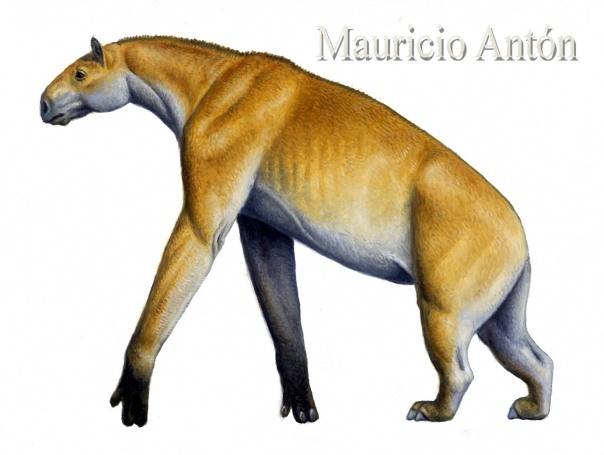 In this species the difference in lenght between arms and legs was even more exaggerated than in other chalicotherids, and its detailed anatomy shows that the animal would walk on its knuckles, probably to save its large hand claws from wear. Those large claws would help this browser to reach relatively high branches while standing bipedaly on its hindlimbs.

Anisodon feeding in its wooded environment

But, as the hindlimb structure shows, once the animal reached its food, it would sit for long periods to eat it, much like living gorillas and giant pandas do. Not in vain some paleontologists call this unique animal the “horse-gorilla”!

This reconstruction of the skeleton and soft-tissue outline of Anisodon shows the usual posture it would use while munching leaves and twigs. The shape of the pelvis reveals the animal’s ability to spend long periods of time sitting down like this 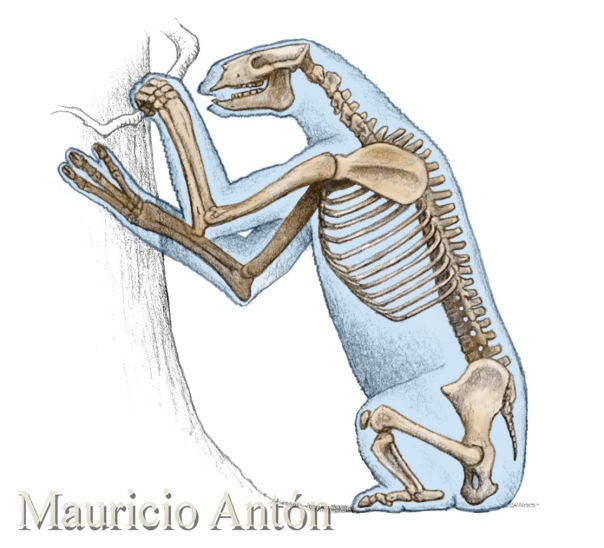 With such strange body proportions, Anisodon would not be an especially fleet-footed creature, so one wonders, what would its anti-predator strategies be? Most likely it would stand its ground in the face of carnivores, rising tall on its hind legs and using its huge claws as defense. Towering over 2 meters tall, a pissed-off chalicothere would not be an enemy to tackle lightly! 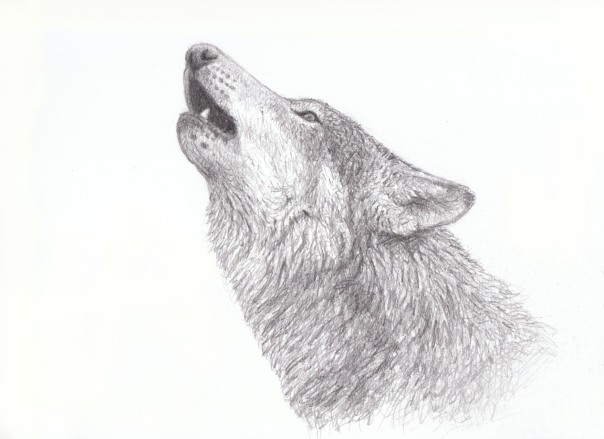 This morning I have started my working day with a quick sketch of a running wolf. My first sighting of a wild wolf over a quarter of a century ago was of an animal trotting effortlessly in the mountains of Asturias (Northern Spain), and that is a memory that doesn’t fail to invigorate me. Today we need that vigour to fight for the wolf, as things are looking extraordinarily bleak for this beautiful animal here in Spain.

Here is my morning sketch of a trotting Iberian wolf

Scientific research is revealing ever more details about the vital role of larger carnivores in maintaining the health of ecosystems, and yet here in Spain we are helplessly witnessing how a part of the administration is opportunistically launching a more or less covert extermination campaign against our most iconic predator, the Iberian wolf.
In an incredibly simplistic approach to population mangement, they approve culling cuotas that in the practice imply wreaking havoc with the packs, as alpha individuals are killed and their hunting experience is hopelessly lost, making the surviving, guideless young wolves more prone to killing livestock. Even young cubs are being killed ”legally”, as the last attempts to keep up appearances are left behind.
This attempt from some reckless politicians to gain a handful of votes is proving intolerably expensive in terms of wild wolf blood. Spanish association “Lobo Marley” is almost single-handedly trying to fight for this icon of our wilerness. Anyone who is concerned about what natural heritage we are leaving for future generations must be worried about this situation. It is time to take action!

If you haven´t signed the petition yet, do it now!

If we could meet the Neanderthals

What would it be like to meet a neanderthal? I suppose much would depend on the eye of the beholder. Some people today are amazingly unable to feel admiration for anything other than themselves, and I imagine the same was true in the Paleolithic… I bet many of the modern humans who actually were face to face with the neanderthals only saw one thing: competition!

A neanderthal tries his aim at an unseen target

The original version of this illustration was done a few years ago for Nina Jablonski’s book “Skin”. A most recommended read! (you can check it in Amazon:http://www.amazon.com/Skin-Natural-Nina-G-Jablonski/dp/0520275896/ref=sr_1_1?s=books&ie=UTF8&qid=1412709706&sr=1-1&keywords=skin+nina+jablonski

However, and given the wide range of contrasting personalities found among modern people, I also suspect that some of our conspecifics from the paleolithic would feel keen curiosity about the neanderthals. I would further guess that special people, such as the shamans, would be among those willing to look across the species frontier. Just magination on my part, but of one thing I am certain: what would happen if we could meet the neanderthals would highly depend on who that “we” would be. And it would also largely depend on what particular neanderthals we would come across! Given their powerful physique and intellegence I doubt they all were peaceful and gentle, and I am certain that we would need to add “dangerous” to the adjectives we use for defining them.

Too many sabertooth drawings (almost)

Trying to put some order among the papers that pile up in my studio I came across some of the folders containing the drawngs I did for the book “Sabertooth” (at least those that did not go to the dustbin earlier on). I gave in to the temptation to open a couple of folders, and as often happens when I do this, I shook my head at the amount of attempts I seem to need in order to get anywhere close to a “final” version of an illustration. How I envy those artists who seem to get straight to their final concepts with almost no hesitation!

Some of the countless sabertooth sketches, spread on the floor for a little while before returning to their folder

I also took a quick look at the finished drawings depicting the skulls of each sabertooth in various views. Not for the first time I thought about how similar many of the skulls must look to the non-specialist viewer, even though they may belong to animals that are rather distantly related. When they were alive, their striped, spotted or plain coats would have gone a long way to help recognize each species, but when it is only their bones that we have to look at, it is a matter of developing an eye for details. Convergent evolution can so easily fool the beholder!

I ended up spreading a few dozen drawings on the floor and gliding my video camera over them to compose a short video. The piece is intended to show you a couple of glimpses of the piles of paper that went into making this book, and to celebrate the fact that “Sabertooth” got this year’s Independent Publisher Gold Medal for Science books.
Happy viewing!

VANISHED WITH THE SABERTOOTHS: THE AMERICAN CHEETAHS

The extinction of the sabertooths at the end of the American Pleistocene is one of those lingering mysteries of paleontology, but if science manages to solve it one day, it will also have to explain the disappearance of many other large carnivores, some of them utterly unsabertooth-like.
Among those predators that vanished with the last Ice Age, there is one that makes old theories about sabertooth extinction crumble: the “American cheetah”, Miracinonyx trumani.
It has often been argued that modern cats, being swift and agile, left the powerful but slow sabertooths behind in the evolutionary race. But in North America, one of the fleetest felines ever to exist went extinct broadly at the same time as the sabertooths did.
Whatever the cause of the American cheetah’s extinction, it seems that if it could come back today, it would still find one of its favorite prey around, concretely the pronghorn. Often called the American antelope, this ruminant is no true antelope, and it belongs in a family of ts own, the Antilocapridae, which has only one living species but had a considerable diversity until the end of the Pleistocene. It has been suggested that the amazing speeds that this ungulate can attain (up to 85 km/h) are an adaptation to escape from a predator that no longer exists, and the American cheetah certainly fits that description.
Many years ago I prepared a reconstruction of Miracinonyx trumani for National Geographic Magazine, an assignment that took me to the university of Kansas in Lawrence, where paleontologist Larry Martin showed me the amazing collection of cheetah fossils from the site of Natural Trap Cave (Wyoming).
My observations and measurements of that material allowed me to create an accurate reconstruction of the skeleton of M. trumani, which emerged as a cheetah-like animal indeed.

Here is a sketch of the skeleton of Miracinonyx trumani, based on my study of the fossils from Natural Trap Cave 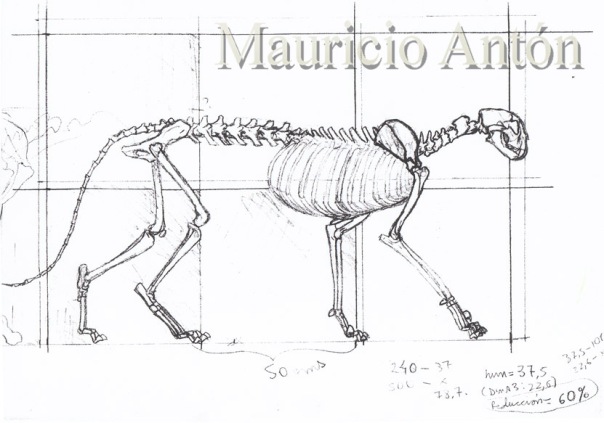 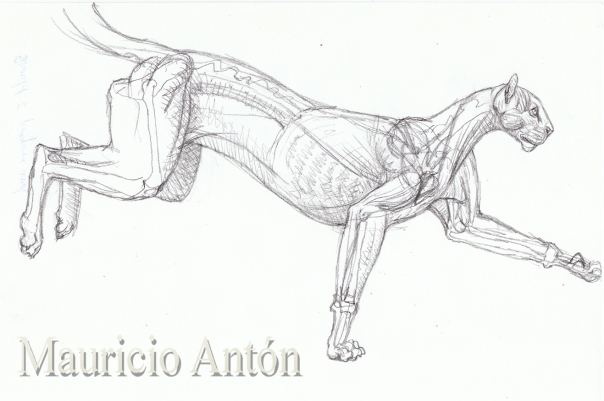 In this later sketch I depicted the animal in the same pose but in a slightly more frontal view.

The scene had to depict the moment when the cat is hooking the hind leg of the pronghorn with its dewclaw.

In this later sketch I changed the pronghorn in the scene from the extant Antilocapra to the extinct Stockoceros. I also changed the environment to fit with the surroundings of a fossil site where both cheetah and pronghorn were recorded. 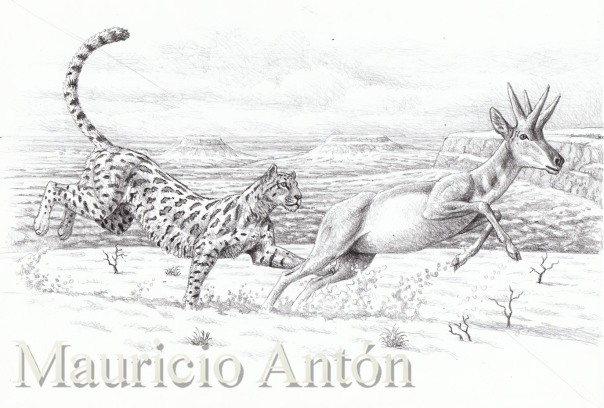 And here is the final version that appeared in the June 1997 issue of NG Magazine:

I gave the extinct cat a hypothetical coat color pattern that is not especially cheetah-like, trying to reflect the concept that it was not a true cheetah. Fossil and genetic evidence suggests that, while pumas, Old World cheetahs and American cheetahs are closely related and have a common ancestor not shared with other cats, Miracinonyx developed its adaptations for speed independently from the Old World Acinonyx. If this is true, and it seems to be, then this would be a very remarkable example of convergent evolution.