THE BEGINNINGS OF CATKIND: PROAILURUS

It has been said before: the cat is one of those creatures that nature somehow got right from the start. The earliest cats known from the fossil record, such as Proailurus and its close allies, would probably strike us as rather familiar if we could see them in the flesh. Ranging from the size of a domestic cat to that of an ocelot, these early cats lived in the forests of the late Oligocene and early Miocene of Europe, around 25 million years ago.

This reconstruction shows Proailurus lemanensis in the subtropical forest of what is now Saint-Gérand-le-Puy, France

Like some modern cats living in dense woods, they were stocky, rather short-legged but extremely flexible and agile creatures. Their feet were not as fully digitigrade as those of their modern relatives, reflecting their need for stability when moving along the branches of trees, and their muzzles were still a bit longer, to accomodate their more complete dentitions. Since they were not yet as specialized for a diet based on meat as modern cats are, they still retained a few more premolar teeth, resembling the condition of some modern viverrids. 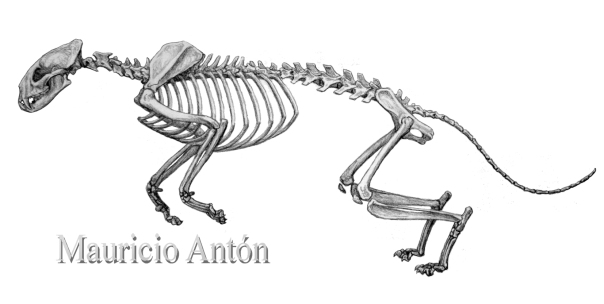 In spite of the differences mentioned above, the overall morphology of Proailurus was very clearly felid, and by the middle Miocene, its descendants, such as Styriofelis (profiled in an earlier post) had attained almost modern anatomy and adaptations.

This reconstruction shows a mother Proailurus lemanensis eating from its latest kill, a diminutive artiodactyl of the genus Cainotherium, while its cubs play around in the branches.

The climbing abilities of early cats would be essential for the survival of these relatively small carnivores in the face of the threat of larger predators suchas the amphicyonids or “bear -dogs”. But iti si not unlikely that Proailurus would catch some of its prey in the trees, as does a living carnivore that shows remarkable similarities in its anatomy and adaptations: Madagascar’s fossa.

These quick sketches show the ambiguously cat-like demenour of the fossa, totally a consequence of convergent evolution.

The skeleton of this oversized relative of mongooses is so similar to that of Proailurus lemanensis that one is tempted to think they should be close relatives, but the fact is that the the fossa (Cryptoprocta ferox) evolved all its catlike adaptations in a totally independent way, and is not at all a member of the cat family. Like all of Madagascar’s carnivores it evolved from a mongoose-like ancestor that rafted to the island many million years ago, and now it is an efficient arboreal hunter of the incredibly agile lemurs. It is inevitable to think that Proailurus may likewise have pursued along the high branches some of the squirrels and even birds of Saint-Gérand-le-Puy (so abundantly preserved as fossils at the site), displaying its full acrobatic abilities. Surely a sight not to miss if we could travel back to the very origins of catkind!

You may wonder how can we reconstruct the life appearance and habits of exinct cats from their fossil remains. You can get all the answers in our video “Bringing the Sabertooths back to Life”
Watch a trailer here: https://www.youtube.com/watch?v=_ziSfOkvx5I
Download the full documentary film here: http://wildworldvisuals.com/en/23-video-downloads

S.O.F.A. (Society of Feline Artists) associate member Desiree Hart was one of the participants in this year’s “Drawing the Big Cats” safari, and she was kind enough to share her experience through the Society’s blog. Thank you Des, and it was wonderful to have you on board!

A few postcards from the safari:

An intimate look at the Okavango cheeath family 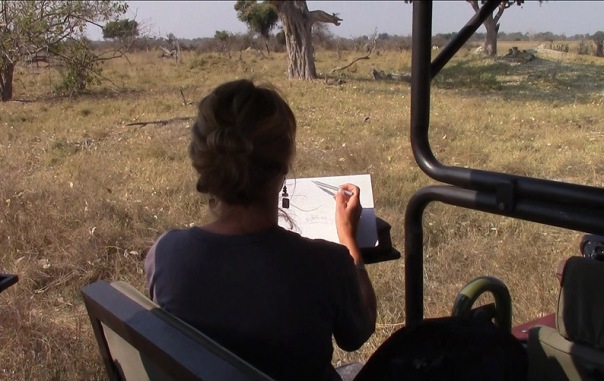 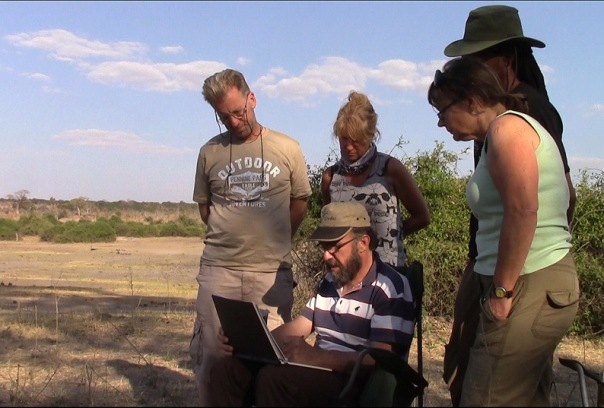 A quick sketching demonstration at camp

As many of you already know, last August we celebrated the second edition of our “Drawing the Big Cats” safari in Botswana. And what a trip we had! I have seen quite a few lions in my safaris but our sightings of the Savuti pride this year must have been the most beautiful ever!

With so many amazing observations, it really takes months to digest and make sense of what you have seen. And then, with my mix of artistic and scientific approaches ( a sort of uncomfortable “Jeckill & Hyde” duality), whenever something strikes me as beautiful I need to ask myself “what makes it beautiful?”, and then I start to analyse things. This means looking time and again at the images we captured in the field, and spending one pencil after another in attempts to grab the “spirit” of the feline presence. Why should I deceive you, I know I am miles from getting even close to it, but in this case the excitement is not in getting there, but in being on one’s way there!

Now you can watch a new video where I try to get to grabs with the face of a Savuti lion using my pencils and some additional stuff from my toolbox here. I hope you enjoy!

Modern hyaenids include 3 species of large scavengers and hunters with dentitions adapted for bone cracking (the spotted, striped and brown hyaenas) plus a smaller, specialized insect eater (the aardwolf).
But like all other families of modern large carnivores, the hyaenids have rather humble origins, and the earliest members of the family, included in the genus Protictitherium, were rather unimpressive creatures, resembling in size and proportions a mixture between a terrestrial civet and a small jackal. Their all-purpose dentition allowed these animals to deal with a variety of food items, from small vertebrate and invertebrate prey to carrion to ocassional vegetable matter.

As shown in this life reconstruction, Protictitherium would be more similar in size and proportions to a small jackal or a civet than to its modern relatives, the hyenas.

Protictitherium fossils are a very common occurrence at the Batallones fossil sites, which is not surprising given their scavenging abilities. The stench of the bodies of animals caught in the natural traps would attract these small carnivores from miles around, and their agility allowed them to enter the cavities without problems, but getting out was of course a much more steep prospect.
Larger, more specialized hyaenid species are known from other fossil sites of late Miocene age, but for some reason they are absent from Batallones, or at least we have not found them yet. For one thing, the larger carnivore guild was already so crowded with different species at Batallones that the presence of a big hyaenid would have exacerbated the competition for resources. The agile, unobtrusive Protictitherium, on the other hand, could literally swirl among the feet of the larger predators and snatch its lunch from the leftovers of their kills. But once they entered the natural traps, all carnivores shared the same tragic doom, a destiny as dramatic as its consequences have been rewarding for modern paleontologists!

Hesperocyon, or the humble origins of the dog family

The dog family, the Canidae, includes today such formidable predators as the wolf, the Asian dhole and the African wild dog, efficient group hunters of large prey. But over 36 million years ago, when the earliest fossil canids are recorded, dogs would make a rather modest sight. It was the late Eocene, and most mammals were creatures of moderate size -there was no single animal on land to rival the body mass of a modern elephant, for instance. North America, the continent where the dog family had its origin, was largely covered by forests, and that would be the habitat where the earliest canid would thrive.

Here is a reconstruction of the skeleton and body of Hesperocyon

Paleontologists know that earliest dog as Hesperocyon (meaning “Dog from the West”), and the animal was about the size of a domestic cat. Its body proportions resemble those of a genet more than those of any dog. It had short ferelimbs, long hindlimbs and a long back and tail, proportions that suggest an agile animal well able to move quicky in the forest floor, jumping and veering around obstacles and climbing when neccesary.

This scene from the American Eocene shows Hesperocyon and its pups where they would spend much of their time -in the forest floor.

Unlike most modern dogs, this was no ling-distance runner, and it didn’t need to. Spending most of its time in a forested habitat it is likely that most of the resources it needed were relatively nearby.

When it ventured into the grassy patches of its envornment, Hesperocyon had to be wary of more powerful creatures, such as the pig-like omnivore Archaeotherium

From such humble origins the dog family evolved into an astonishign variety of shapes and sizes, but most of the more striking forms are unfortunately extinct. Even so, extant dogs are still an impressive bunch, with over 35 species ranging in size from the diminutive fennec to the impressive gray wolf. All that diversity sprang from the unprepossesing stock of Hesperocyon, a creature whose small size and adaptability gave it an almost unlimited evolutionary potential.

I have been pretty busy with several projects as of late, and one of them is to set up my new web page. Some of you may have already noticed that the old web page is no longer active, and I had intended to open the new one quite some time ago but… The problem when you are trying to do too many things at the same time is none of them advances too fast, and the new web is no exception. After several months I have only managed to put together a fraction of the intended contents, but I think it is about time for the page to go live nonetheless. That way you can see it grow in real time as I manage to throw new additions in.
So, you are welcome to check it out and take a look at what’s already on show. To make it worthwhile for “veterans” to browse their way around, I have placed a couple of goodies here and there which you may not have seen before. Happy browsing and I promise to keep the construction going!

Here is the link: http://mauricioanton.wordpress.com/