In 1960, at a time when little was known about the anatomy and body proportions of bear-dogs, American paleontologist Stanley Olsen described a wonderful collection of postcraneal fossils of Amphicyon longiramus, from the Miocene site of Thomas Farm in Florida. Olsen’s paper profiled a kind of predator with no living counterpart. With a body size comparable to that of a modern brown bear, Amphicyon had a longer and more flexible back and a long, heavy tail. Its dentition resembled that of a dog more than that of a bear, and was better suited for consuming meat and bone, while still allowing the animal a varied diet.

Here is my reconstruction of Amphicyon longiramus, based mostly on Olsen’s descriptions of the Thomas Farm material 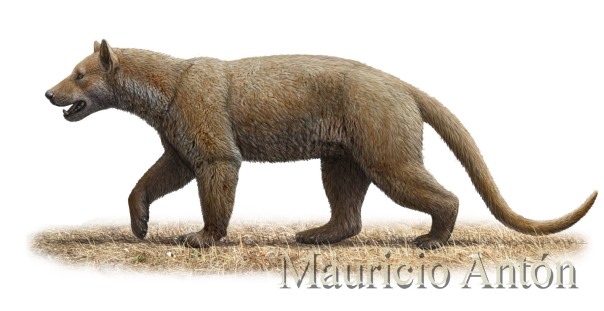 In the middle Miocene, when sabertooth cats hadn’t yet attained their full size and dominance, amphicyonine bear-dogs like Amphicyon were the undisputed ruling predators, both in Eurasia and in North America. Although they could not run especially fast or long, they were capable of ambushing large animals using a vaguely cat-like hunting style, and then they could use their great muscular strength and powerful canine teeth to bring down and kill their prey. But with the late Miocene the rule of the bear-dogs was challenged by the appearance of such powerful felid sabertooths as Machairodus. Later relatives of Amphicyon, such as Magericyon, (best known thanks to the fossil sample from Batallones in Spain)adapted to the new times by becoming somewhat smaller and developing more specialized dentitions for killing and consuming large prey efficiently. But there was no resisting the empire of the machairodonts, and near the end of the Miocene the bear-dogs disappeared for good after many million years of successful evolution.

More than 3 million years ago, somewhere in Northeastern Spain, a volcano exploded and created a large crater. With time the crater was occupied by a lake, known by geologists as a maar. Today, the lake is dry and the crater walls have been largely levelled by erosion, but an exceptional fossil site bears witness to the events that took place there. The site, called Camp dels Ninots, is close to the village of Caldas de Malavella in Girona.
Maar lakes often create remarkably beautiful scenery, with their encircling walls covered by forests, but some of them hide something more sinister. One example is lake Nyos in Cameroon, which in 1986 emitted a large cloud of carbon dioxide that killed thousands of people and animals. Such toxic gas emmissions occur because the pocket of magma beneath the lake leaks the carbon dioxide into the water, and perturbations such as those caused by a landslide can cause the gas to emerge with disastrous effects.
Three million years ago around the Camp dels Ninots maar lake, a rich fauna thrived in a subtropical environment, much warmer than today. Rhinos, tapirs and heavy antelopes crossed the forests and came down the crater walls for a drink at the lake margin. But several of those animals died mysteriously at the shore, and their bodies floated into the lake where they ultimately sank. Their skeletons, completely articulated, got exquisitely preserved as fossils, without any trace of having been disturbed by scavengers. A likely explanation is that the lake belched a cloud of toxic gas, instantly killing all the animals along the shore.
As often happens, the animals’ doom was the paleontologists’ blessing, since the death of so many creatures led to their pristine preservation. As the local authorities planned for an on-site exhibit, I was asked to create several reconstructions of the Pliocene environments and fauna of Camp dels Ninots, including a scene showing the hypothetical origin of the fossil accumulation.

The scene shows antelopes of the genus Alephis and a rhinoceros of the genus Stephanorhinus on the shore, already showing signs of intoxication, while a tapir (Tapirus) lies on the ground, already dead. The bodies of other antelopes float in the lake while a pair of cormorants that happened to fly too low are already falling.
This and other reconstructions of the fauna and environments of Camp dels Ninots can be seen as part of the outdoors exhibit. Thanks to the findings made at the site, we now know a lot more about the anatomy of several species of Pliocene mammals, but, alas, no sabertooth skeleton has been found there as yet. But I don´t give up hope.

In central France, another Pliocene maar lake fossil site, a little younger in age than Camp dels Ninots, has been known for about a century, and it has yielded the most complete skeletons known to science of the typical sabertooth cats of the Pliocene: Homotherium and Megantereon. For several decades the French site, known as Senéze, was exploited without any serious excavation methodology, so we don´t know much about the taphonomy of those early finds. But since the 1990s, new field campaigns have yielded more accurate data, suggesting that the fossil mammal skeletons from Senéze accumulated as landslides coming down the crater walls trapped the animals and dragged their bodies to the lake.

I took this photo of the mounted skeleton of Megantereon from Senéze, exhibited at the Natural History Museum of Basel (Switzerland), back in 1990. All other findings of Megantereon fossils are more fragmentary, so it is only thanks to the exceptional conditions of the volcanic maar lake that we know nearly every bone of this sabertooth cat. 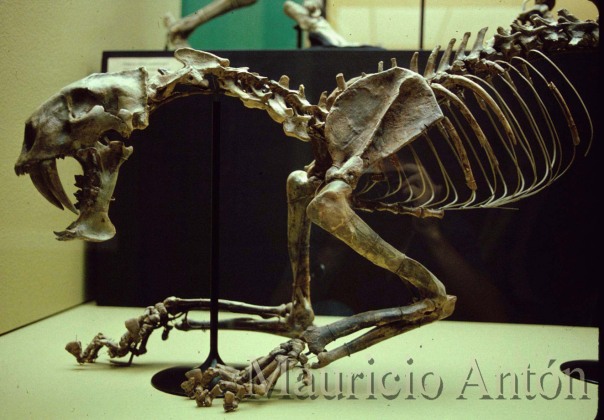 Only a portion of the ancient lake shore at Camp dels Ninots has been excavated this far. Sabertooths like Dinofelis diastemata, whose skeleton is mostly unknown, probably inhabited the area at the time, so it is not impossible that the next excavation will yield an amazingly preserved specimen…who knows?

Volcanic eruptions have provided the right conditions for the preservation of some of the best sabertooth fossils known to science, and not only beacuse of maar lake sites. If you want to know more about volcanoes and sabertooths, read my book “Sabertooth”! http://www.amazon.com/Sabertooth-Life-Past-Mauricio-Ant%C3%B3n/dp/025301042X/ref=sr_1_1?s=books&ie=UTF8&qid=1459250381&sr=1-1&keywords=sabertooth