On the track of Smilodon, at last!

A couple of the earliest posts in this blog were devoted to the scanty record of cat fossil footprints, and in one of them I regretted the absence of any recognizable tracks of Smilodon. That was indeed an important hole in our knowledge because some specialists have long hypothesized that Smilodon would be a plantigrade cat. In fact, several kinds of sabertooh cats had features in their limb anatomy that were interpreted at some point as indicative of a plantigrade posture. Such features were present, for instance, in the skeleton of Homotherium, and back in the 1960s the famous paleontologist Bjorn Kurtén hypothesized that this animal walked on plantigrade hindlimbs. But, what does that really mean in terms of the locomotion an appearance of the living animal? Well, if Homotherium were plantigrade then its rump would be much lower, since the hindlimbs lost a whole segment (the metapodials) in height, and the part of the leg that rested on the ground would be proportionally much longer. The animal’s stride would become much shorter, and its gait, ungainly. One of the clearest ways to show the implications of that hypohesis is to create a detailed skeletal reconstruction of the animal in such a posture and compare it with the digitigrade alternative. I did such an experiment some time ago, and I found the results quite striking.

This illustration from my book “Sabertooth” shows the striking difference between how a digitigrade Homotherium would look (top) compared to a plantigrade one (bottom).

At any rate, other specialists such as R. Ballesio and L. Ginsburg made quite detailed analysis of the functional anatomy of the feet in sabertooths and convincingly argued that Homotherium, and in fact all members of the family Felidae, extinct or extant, were perfectly digitigrade, with the possible exception of the earliest species comprised in he genus Proailurus. My own research in collaboration with paleontologists like Angel Galobart, Alan Turner and Manuel Salesa, added further evidence to confirm the digitigrade stance of Homotherium.
But while there seems to be a growing consensus about the posture of Homotherium, some specialists still think that heavier, shorter-limbed sabertooths such as Smilodon or Xenosmilus would have been plantigrade, and one of their arguments is the sheer mass of these robust animals. Such views imply some degree of confusion between the normal standing or walking posture of an animal and its running abilities. It is an observed fact that many digitigrade carnivores, such as dogs, are fast, lightly built runners, while heavy, robust animals like bears are plantigrade. But this does not imply a real correspondence between build and posture, and one must rememeber that among extant cats the hyper-robust jaguar, for instance, is perfectly digitigrade, just like the agile cheetah is. Whatever the case, we still see skeletal reconstructions that show those extinct cats with a bear-like, plantigrade stance.

The details of the limb osteology of these animals fit better with a digitigrade posture, but finding the creatures’ fossilized footprints would go very far in proving their actual gait and posture. And finally, earlier this year, Argentinan scientists M. Magnussen and D. Boh reported the discovery of two sets of carnivore footprints in a Pleistocene site near the coastal city of Miramar that belong, with all likelihood, to Smilodon populator, the largest and heaviest species of the genus. The tracks are the right age, the right size and the right morphology to correspond to Smilodon, whose fossils miraculously happen to be present in the same locality. And there has never been a cat-like carnivore in South America that even approached the size of Smilodon, so the attribution of the footprints looks pretty safe.

This illustration shows a reconstruction of Smilodon populator shown to scale with one of the recently discovered footprints. The print corresponds to the right forefoot.

What about the cat’s gait and posture? The footprints leave no doubt that the animal was digitigrade, just like the much smaller modern jaguar is. The footprints also confirm that the animal’s claws were retracted during the walk, although there is one interesting detail in one of the prints, that corresponds to a forepaw: a small mark on the inner side of the footprint would correspond to the position of the dewclaw, which doesn´t normally touch the ground in modern cats. But, given the remarkably short metapodials of Smilodon combined with the enormous size of its dew claw, it would make sense that it would touch the ground at least occasionally, as it seems to have done in this case. Also, the footprints’ enormous width corresponds well with the immense size of the paws of this predator, whose trail has been finally found, more than a century after its fossils were recognized by paleontologists as those of perhaps the most powerful cat ever to walk the Earth.

Out in the wild, the big cats spend most of their time just resting, and it is only on rare occasions that one gets a glimpse of their full potential for explosive action. And yet it is those brief moments that their whole structure is designed for. When I sit at my drawing table conceiving an action scene, as in the case of my illustration of two fighting Barbourofelis, I try to get all the details of the action right, and I use my memory and all the reference material available to represent the conflict taking place. 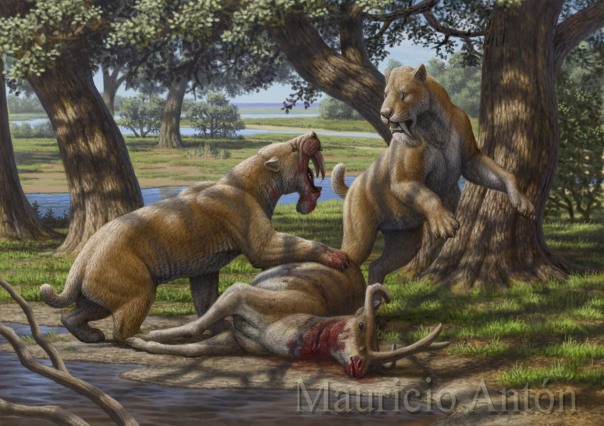 But last summer in Botswana we had a totally unexpected opportunity to see what a big cat fight really looks like. I referred to that episode in a previous post, but there is so much more about those amazing moments. One amazing aspect which unfortunately you cannot show in a painting is sound: the animals are impressively loud, and you don’t just hear the sound, it really gets to your guts. Another important factor is speed (it all happened in less than 5 seconds) but that is also impossible to show in a static image, even if it can be implied. There is a lot of other elements that can indeed be represented through drawing and painting, and they take a good deal of study to comprehend. It is a good thing that we can bring back our pictures and videos in order to elaborate an experience that struck us like lightning and will stay with us while we live. 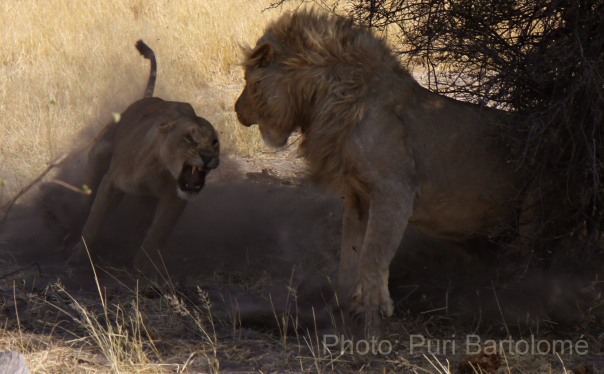 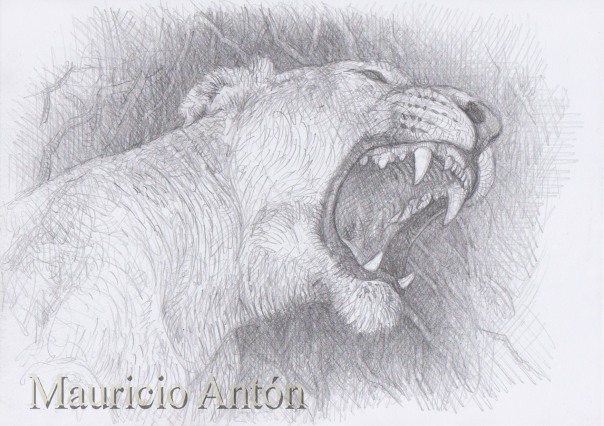 Watch this video showing a few of the many highlights of our trip: