A Glimpse into an Eocene Lost world

Isn´t it amazing to think that 35 million years ago, long before the sabertooth cats (or any true cat for that matter) ever evolved, there was such a specialized sabertoothed carnivore as Hoplophoneus mentalis?. This creature was about the size of a large lynx but it specialized in taking prey larger than itself, which it killed by a devastatingly efficient bite to the throat. But rhino-sized animals like Megacerops, shown in the background, had nothing to fear from this cat-like predator. 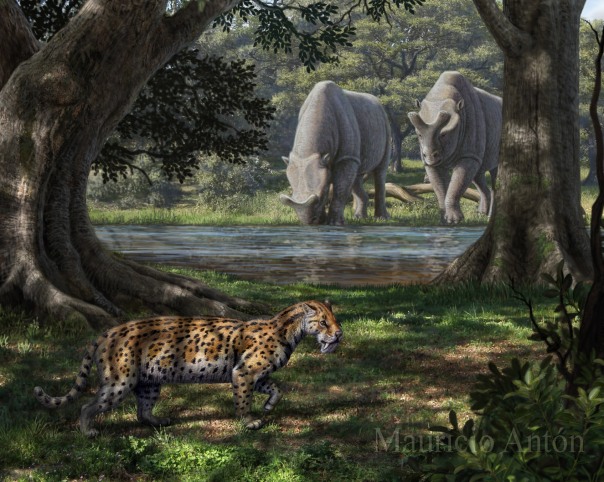 At a first glance (and even at a second and third) the skull of Hoplophoneus mentalis is so similar to that of true sabertooth cats like Megantereon, which lived more than 30 million years later, that you would be excused for taking it for a real cat, even for a direct ancestor of such younger species. In fact, the best heads of paleontology were such deceived for many decades until the detailed study of obscure anatomical features, such as the structure of the ear region of the skull, revealed the true affinities of those cat-like carnivores, which are now classified in an independent family: the Nimravidae. 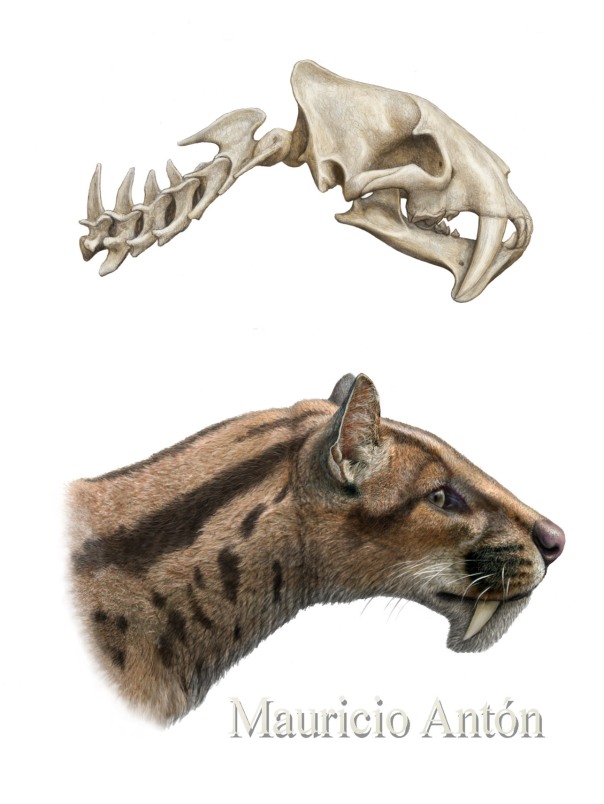 The late Eocene of North America, nimravids included, is one of the most amazing “Lost Worlds” discovered by paleontology. Read more about it in my book “Sabertooth”!

Looking back at four years of our “Drawing the Big Cats” safari I am amazed at how much I have learned first-hand about the cats and their adaptations to their wild home -and I thought I knew something! That experience becomes a key ingredient to enrich my renderings of the felines, and my reconstructions of their fossil relatives and their lost world, not to mention the challenge to try and reflect those complexities with my limited abilities… But beyond those “practical” applications, I also get the impression that my life has grown in several dimensions: length, width, depth, height… and I suspect I am not alone in feeling that way!
Length, because each minute in the wilderness of Botswana seems to last so much more than it would do on an average day back at home. Our life lengthens each time we go there!
Width, because the endless horizons of the African savanna seem to create new room within the soul, to make our mind more spacious and free to roam wherever it will.
Depth, because the myriad sensations, both striking and subtle, that surround us while on safari, (especially when camping out in the bush), renew our senses and give us an intuition of a world where boredom is impossible and whose deep complexity we could not begin to comprehend in a lifetime.
And height, because there we are given a privilege of a true spiritual kind. Flying over the Okavango delta we know we are witnessing a miracle, not only because this giant oasis in the Kalahari sands is such an improbable phenomenon, but also because its preservation is a monument to the faith of many women and men who have fought hard to preserve this jewel for all of us. I get a renewed sense of awe both at wildlife and at that particular breed of people who can recognize what gives our life dignity, what makes us truly human, and are ready to devote themselves to protect it in a brave and selfless way.

After each trip we come back home with a treasure of memories, pictures, sketches… but perhaps the most important thing is less easy to define: we could call it a transformation. While out in the wild, we are reminded of (and submerged in) the things that matter in life: nature, art, good company. And we become more able to free ourselves from the many petty traps that ensnare us in everyday life. If I picture myself back in Savuti, looking up at the star-filled sky after the campfire is no more than cooling embers, then, strangely enough, everyday problems appear more manageable. Have you felt the same way? Well, no magic tricks here, just pure life force of a kind we can only get in the place that made us human: the African savanna, the Cradle of Human Kind. I cannot wait to go back!

Legends of the Flores “Hobbits”

A couple of years ago a TV producer asked me to create a few reconstructions of Homo floresiensis, popularly known as the “hobbit of Flores island” for a documentary film. They wanted the images to be grounded on scientific fact, but quite especially they wanted them to be dramatic and striking.

The first image depicts an imaginary conflict between a band of “hobbits” and several Komodo dragons. The producers asked me to show the very biggest dragons that could exist, in order to remark the contrast with the tiny, 3-feet tall hominins

The second image shows the hobbits spending time up in the jungle canopy, in relation with the climbing ability suggested by some details of their osteology

Of course it is possible that such “climbing” adapations are just primitive features retained by H. floresiensis from its distant ancestors, but at any rate the right question to ask is probably why would they spend any substantial time up in the branches? Escaping a hungry giant varanid would be one occasional reason, but anatomically modern humans (giants to the hobbits’ eyes), which invaded the island at some point, could be another motivation to seek refuge up in the trees.

Although the elephant-like creatures were very small in comparison with their relatives from the continent, their hunters were similarly tiny, so this lilliputian confrontation implied a considerable risk of injury.

All in all, making this set of illustrations was a very interesting experience. When creating scenes from the distant past I tend to be rather conservative and choose the kind of interactions that are most likely to have taken place. But in this ocassion, the pressure from the client to create more dramatic, risky scenes took me to some exciting new grounds.