Spying on the big cats: an ancestral occupation

Prey animals are often quite interested in their predators. If you have spent time in the African wilderness you may have seen how the antelopes seem to shadow a leopard that ventures out from cover. The herbivores apparently consider that the most dangerous predator is the one that you can’t see, so they always try to keep the big cats in sight.
For our own ancestors, curiosity about the predators was a more complex thing. The very earliest hominins were almost exclusively vegetarian so they fit the role of potential prey very well. Fascination for the big cats equaled fascination with danger, a danger you need to know in order to better avoid it.
But, just as modern chimpanzees now and then include some monkey in their diet, australopithecines were likely to have more than a passing interest in meat, and from that point on, the felids became even more interesting, as examples of an extremely efficient fellow predator.

Somewhere in a humid forest in Southern Africa, a hominid of the species Australopithecus africanus spies on a melanic specimen of the “false sabertooth” Dinofelis barlowi, feasting on its kudu kill 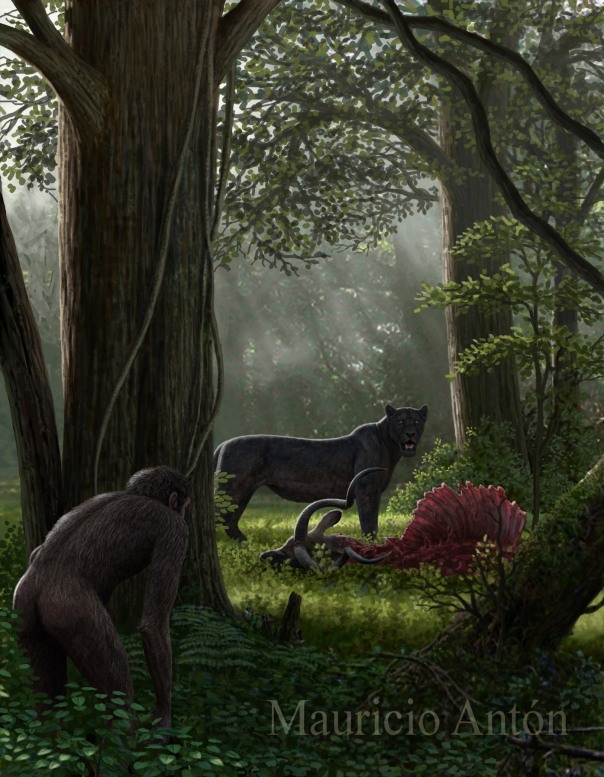 Then another big change happened in our hominin ancestors’ behavior. Not content with an ocassional taste of meat, they became regular scavengers, a development inseparable from their ability to shape the kind of stone tools that allowed them to deflesh and break the bones of animals. From that point on, sabertooth cats and other big predators became potential providers of fresh carcasses, and hominins needed to become ever more acquainted with the details of their behavior, not only in order to predict when and where to look for their kills, but also to avoid becoming new kills themselves during the process of stealing.

Perhaps it is not surprising that when modern humans developed the ability to create art, the first subject they turned their attention to were the big cats. Learning about the felines was a way to know nature (and human nature) in more depth. To this day, drawing the big cats is an unsurpassed way to grasp the secrets of what it means to be alive in this world. I for one never tire of it, and it is good to know that my passion has such a long pedigree. If I am a freak, at least I am in good company!

Several years ago I was approached by the BBC and asked to produce an accurate reconstruction of the giant short-faced bear, Arctodus simus, to be used by a team of 3D artists in order to create life-like animations of the animal. I had drawn Arctodus before but this project required a more in-depth approach, so I set to review all the available information about the anatomy and body proportions of this amazing ursid.
I consulted with paleontologist Paul Mattheus from the university of Alaska in Fairbanks who sent me his Phd thesis along with a wealth of data about the giant bear. With all those figures and measurements I put together a detailed reconstruction of the beast’s skeleton, based mostly on the nearly complete specimen from Fulton County in Indiana, but complemented with bits from other findings. One especially nice skull from Alaska allowed me a detailed restoration of the animal´s head.

In this collage you can see my drawings for the reconstruction of Arctodus simus, from a working sketch of the skeleton to a restoration of the animal’s musculature and soft-tissue outline and a detailed rendering of the head

The creature that emerged from those drawings was quite impressive. With especially long limb bones, it attained a shoulder height of 1.75 meters -while standing on all fours the animal’s eyes would be level to yours! The reconstructed head had a short face indeed, but on top of that the head looked relatively small for the animal’s massive body. Seen from the front, Arctodus also looked tall, narrow and small-headed relative to a modern brown bear.
The next step was to set the animal in motion. The relatively long limbs of Arctodus led some paleontologists to infer that it would be a good sprinter, a very active predator catching speedy prey on the run. But Mattheus’ analysis of the giant bear’s anatomy led him to a different conclusion: Arctodus would move around at moderate speeds with an efficient pace, with more endurance than speed, which in his view was an adaptation for covering huge distances in search of carrion that it would then appropriate using its huge bulk to expel other predators. In other words, the giant short-faced bear would have been a kleptoparasite. Even its great stature when standing on its hind legs would allow it to scan the horizon for any sign of a recent kill.

This second batch of sketches shows the pacing walk of Arctodus and the bipedal posture it would adopt now and then to scan its surroundings. Finally there is a full-color rendering of the living animal

Was that the real ecological niche of Arctodus? Well, if the dentition of an animal is our main guide to inferring its diet, then Arctodus was not a specialized scavenger, for one thing it didn´t nearly have the refined adaptations of a hyena for cracking bones. The teeth of Arctodus were, in spite of differences in detail, bear teeth, and that means a broad-spectrum diet. It could certainly steal kills from most predators around it, but it could also consume vegetable matter and kill its own prey now and then. Its wide distribution in North America indicates a considerable habitat tolerance, and probably a high degree of adaptability, but not enough to survive the wholesale extinction of large mammals at the end of the Pleistocene. As a result, now we need to resort to paleobiological reconstruction if we want to have a reasonable idea of what it looked like and how it behaved. Sad, but better than nothing!

Browsing old folders I came across a series of sketches I did several years ago during the preparation of my illustrations for the American Museum of Natural History exhibition “Extreme Mammals”. Among them there was a sequence of drawings showing the process of reconstruction of the American Miocene artiodactyl Synthetoceras tricornatus. I had painted this species before but in this assignment the animal would be shown in full detail so I wanted to double check all my information. One of the best sources was the sample from the fossil site of Love Bone Bed in Florida, and it served me as a reference to bring the animal back to life. I started by drawing all the known bones to scale in order to get an accurate representation of body proportions. I drew missing parts of the skeleton using a more completely known relative, Protoceras, as a model.

Here are the first stages of the reconstruction of Synthetoceras, starting with the assembling of the bones all drawn to scale according to published measurements, and continuing with soft tissue outline and external appearance. 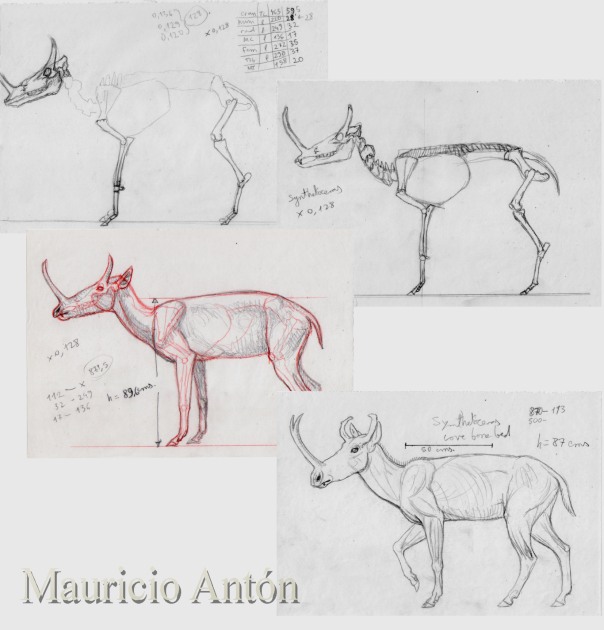 Once the skeleton was assembled, I could proceed to draw the sof tissue outline of the living animal in side view, which gave me a clear idea of its proportions. With a shoulder height of nearly 90 cm, the animal was not especially impressive, and couldn´t rival a modern red deer, for instance, in linear dimensions. But its robust, stocky bones supported a heavy body and a male like the one depicted in this reconstruction could weight around 200 Kg.

The bizarre head appendages, sported only by the males, are the most characteristic feature of this species, and it was essential to depict them correctly. In order to give them depth and realism I needed to make sure that the shading was right, and to that end I sculpted a small clay model of the head, which I put under the kind of light I wanted to use for my reconstruction.

Here is a second batch of images showing the clay model of the Synthetoceras skull and the various drawings that incorporate the lighting based on it. The animal was first shown walking but finally a more dynamic pose was chosen.

The final step in the reconstruction was to create a hypothetical coat color pattern. Again, the exhibit designers wanted something dramatic, so I borrowed patterns from a diversity of modern ruminants in order to create something that had a lively contrast but remained biologically sensible.