In the late Eocene, some 50 million years ago, the area of the Paris basin was occupied by extensive tropical forests with an abundant, exotic mammalian fauna. Many species from that epoch were described by pioneering paleontologist Georges Cuvier, including Adapis, a member of the early primate family Adapidae. This small animal, weighting about 1 Kg, was an agile if relatively slow climber that sought fruits and tender leaves in the green canopy.

Here is my reconstruction of Adapis, based on cranial and postcranial fossils from the Paris basin. 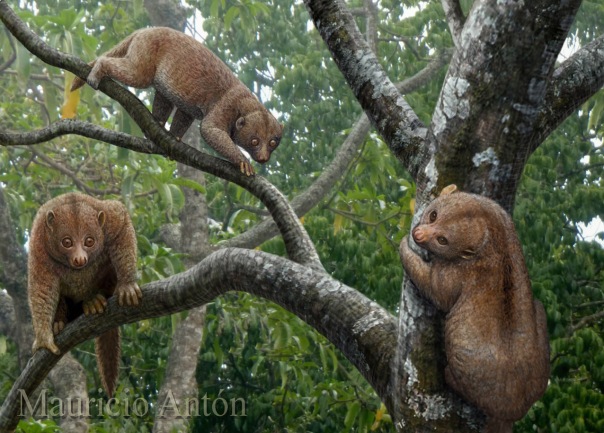 But the peak of primate activity in the Eocene forests of the Paris basin probably took place during the night. When the adapids went to sleep with their bellies full of vegetable food, faster primates, members of the family Omomyidae, emerged from their resting places in search of a diversity of food, including living prey. Like modern tarsiers and galagos, they had short muzzles, huge forward-facing eyes, and long hindlimbs well adapted to leaping from branch to branch in pursuit of insects and other small creatures.

Here is my reconstruction of 3 species of nocturnal primates form the Paris basin. From left to right: Necrolemur, Peudoloris and Microchoerus.

I prepared these reconstructions as part of a collection of illustrations for C.S. Larsen’s masterly textbook “Our Origins”, published by Norton and now in its successful fourth edition. Check it on Amazon: