From Sketch to Painting: Simplifying

While preparing the illustrations for the “National Geographic Book of Prehistoric Mammals” with Alan Turner we agreed that we needed a double page spread image showing the sabertooth cat Smilodon populator in pursuit of its prey.

The core image was a couple of sabertooths leaping from behind a fallen tree on an unsuspecting Macrauchenia.

From that central image I ellaborated on the concept of a mixed herd of grazers including several macrauchenias an some South American horses. I played with the impression of a diversity of animals exploding in different directions as their peaceful grazing was interrupted by the predators. 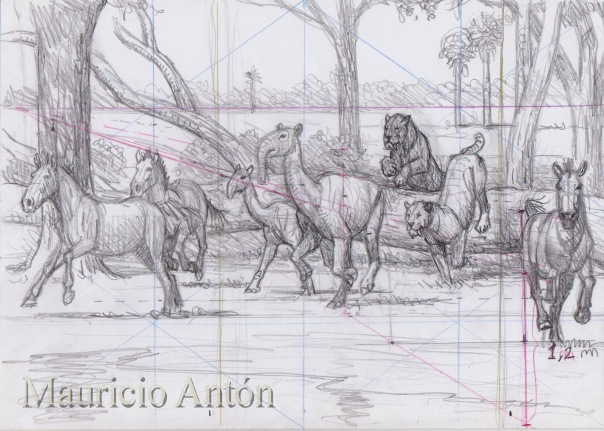 But looking at the sketch I felt I had somehow overdone it, and I decided more simplicity was needed.
So, off went the horses (although one of them “mutated” into a Macrauchenia…), and the remaining elements got spread out a bit to fill the double-page spread format. Now the animals had more room to breath and the whole thing was more relaxing to look at. This third sketch went to the canvas with hardly any modification.

Looking at the final painting and the sketches all these years after, I get the impression that the more “crowded” alternative could have worked as well after all, if only I had had more time… but the practical fact was that to paint that version in oils would have been too time-consuming given the tight deadlines for the whole book project!

Sometimes you cannot separate too clearly the creative needs from the more mundane circumstances of your work, but often, in spite of the frustrations, the results improve thanks to those limitations… often, but not always, and not neccessarily!

In my previous post I introduced the concept of “ultra-sketch” and I recalled how, several years ago, I had to do one such hyper-detailed pencil version of my reconstruction of the Koobi Fora environment for the Altamira museum.
Now here is another piece I did for the same project: an Ice Age landscape in the Cantabrian region with some tipical late Pleistocene species such as woolly mammoth, woolly rhino, reindeer, horse and cave lion, all abundantly depicted in the Cave Art of northern Spain and France.
Once again the painting was so complex that I was in serious danger of not finishing it in time for the exhibition opening, so I was extra careful to make the preliminary sketch as clean and detailed as possible so it could take the place of the finished painting -for some time.
This was a tricky scene to draw because snow is not the most pencil-friendly material, in fact it is mostly defined by the way other elements, such as vegetation or the animals, interact with it and each item has to be painstakingly outlined against the white. 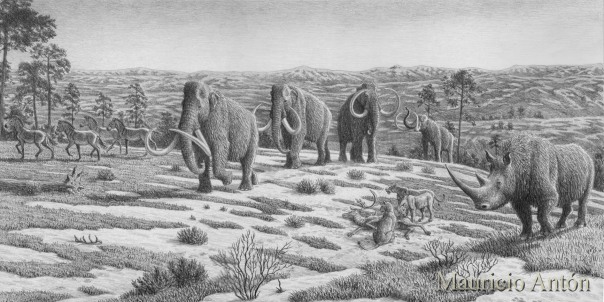 In the finished oil painting I changed the disposition of a few snow patches and shrubs, but otherwise I respected the sketch almost exactly, not least to avoid contradictions with a version that Museum viewers might already become familiar with!

From Sketch to painting: “Ultra-sketches”

Back in the days when I used to do all my prehistoric scenes in oils, it was of the essence that my sketches were quite precise and detailed, because once you start painting with the brush on the canvas, there is little room for improvisation. Of course you can change your mind and hide the old dry paint under fresh layers of oils but the process is time-consuming to say the least -for me it was usually pure agony to incorporate any substantial changes to an ongoing oil painting.
Painstakingly detailed sketches were created by classic masters of paleoart, especially by Rudolph Zallinger whose scale color sketches for the Yale Peabody Museum murals were so detailed that Time magazine published them as if they were finished illustrations in the form of large, several-pages-wide folds. Many of us grew believing that they were the finished museum murals.
I have created especially accurate pencil sketches not only to define all the details -and thus pave the way for the process of painting- but also because in some occasions I didn’t expect to get there to the exhibition opening deadline, and the exhibits designers needed something to show in the meantime.
That was the case with a series of large oil paintings I did several years ago for the Altamira Museum in Northern Spain. One of them was a scene set in the early Pleistocene at Koobi Fora in Northern Kenya. My pencil sketch was more detailed than I would normally do, so it could take the place of the color version until the latter was finally completed.

Here is the detailed pencil sketch…

And here is the finished oil painting of the Koobi Fora scene.

The primates and the eagles of doom

One of the most intricate illustrations I have done recently is not about extinct species (not yet at least!). It shows the diversity of primates at the Tai Forest Reserve in Ivory Coast, West Africa. There are 8 different species of monkeys in that forest and, as scientists have found after years of field research, all of them are regular prey for the most impressive raptor in the area: the African crowned eagle. There are also 3 species of strepsirhine primates there (shown in the lower left corner), but their nocturnal habits keep them off the eagle´s menu.

I created this panoramic view of Tai forest for Clark Larsen´s masterly textbook “Our Origins”.

Hominids (humans and chimpanzees) live in in Tai forest as well but they are generally not attacked by the raptors. In the distant past, however, our own hominid ancestors were indeed part of the eagles’ diet, as shown by the marks in the skull of the famous Taung child, a young individual of Australopithecus africanus described as a new species by Raymond Dart back in the 1920s. It justly became one of the most important early findings in the study of human evolution, but the fact that it had fallen prey to an eagle would not be discovered until much later. In 1995 Ron Clarke and Lee Berger suggested that the accumulation of primate bones at the site of Taung could have been the result of the raptor’s activity, and the in 2006 Berger published a study of damage to the bone which revealed the bird’s talon marks on the hapless child’s skull.

I drew this impression of the Taung child’s sad end for Alan Turner’s and my book “Evolving Eden” in 2004. A couple of years later, Berger’s study of the marks in the child’s skull would confirm the raptor’s role in its death.