THE BEGINNINGS OF CATKIND: PROAILURUS

It has been said before: the cat is one of those creatures that nature somehow got right from the start. The earliest cats known from the fossil record, such as Proailurus and its close allies, would probably strike us as rather familiar if we could see them in the flesh. Ranging from the size of a domestic cat to that of an ocelot, these early cats lived in the forests of the late Oligocene and early Miocene of Europe, around 25 million years ago.

This reconstruction shows Proailurus lemanensis in the subtropical forest of what is now Saint-Gérand-le-Puy, France

Like some modern cats living in dense woods, they were stocky, rather short-legged but extremely flexible and agile creatures. Their feet were not as fully digitigrade as those of their modern relatives, reflecting their need for stability when moving along the branches of trees, and their muzzles were still a bit longer, to accomodate their more complete dentitions. Since they were not yet as specialized for a diet based on meat as modern cats are, they still retained a few more premolar teeth, resembling the condition of some modern viverrids.

In spite of the differences mentioned above, the overall morphology of Proailurus was very clearly felid, and by the middle Miocene, its descendants, such as Styriofelis (profiled in an earlier post) had attained almost modern anatomy and adaptations.

This reconstruction shows a mother Proailurus lemanensis eating from its latest kill, a diminutive artiodactyl of the genus Cainotherium, while its cubs play around in the branches. 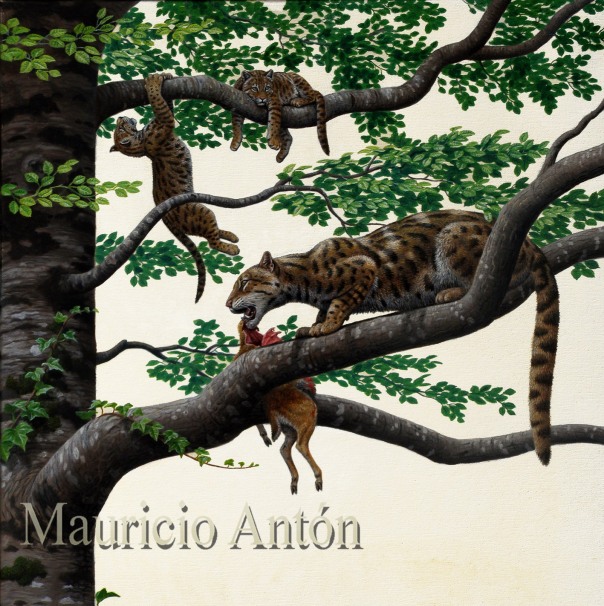 The climbing abilities of early cats would be essential for the survival of these relatively small carnivores in the face of the threat of larger predators suchas the amphicyonids or “bear -dogs”. But iti si not unlikely that Proailurus would catch some of its prey in the trees, as does a living carnivore that shows remarkable similarities in its anatomy and adaptations: Madagascar’s fossa.

These quick sketches show the ambiguously cat-like demenour of the fossa, totally a consequence of convergent evolution.

The skeleton of this oversized relative of mongooses is so similar to that of Proailurus lemanensis that one is tempted to think they should be close relatives, but the fact is that the the fossa (Cryptoprocta ferox) evolved all its catlike adaptations in a totally independent way, and is not at all a member of the cat family. Like all of Madagascar’s carnivores it evolved from a mongoose-like ancestor that rafted to the island many million years ago, and now it is an efficient arboreal hunter of the incredibly agile lemurs. It is inevitable to think that Proailurus may likewise have pursued along the high branches some of the squirrels and even birds of Saint-Gérand-le-Puy (so abundantly preserved as fossils at the site), displaying its full acrobatic abilities. Surely a sight not to miss if we could travel back to the very origins of catkind!

You may wonder how can we reconstruct the life appearance and habits of exinct cats from their fossil remains. You can get all the answers in our video “Bringing the Sabertooths back to Life”
Watch a trailer here: https://www.youtube.com/watch?v=_ziSfOkvx5I
Download the full documentary film here: http://wildworldvisuals.com/en/23-video-downloads