While preparing a complex paleo-scene with several animals in their environments, I draw line sketches by the dozen, many of them too rough to show even here. But once the anatomy of the animals and the composition have been solved, the matter of color needs to be dealt with. Some times from the very beginning you have a rather definite idea of the palette you want to use, while in other occasions your concept is more defined regarding shapes than color or atmosphere.
One case where I had a concrete idea from the start was the scene with a herd of indricotheres of the genus Paraceratherium which I painted for the National Geographic Book of Prehistoric Mammals.

I wanted to play with the sober contrast between the grey animals and the orange-colored dry grass, and I wanted to use light grey dust to intermix both elements. The idea seemed clear and simple enough, but for this project I had such tight deadlines that I could hardly leave anything to improvisation. In such cases, “more is less”: a little more time invested in a preliminary color sketch is less time wasted later on in changing your mind about color schemes.

So, based on my preliminary pencil drawing I did a very rough color sketch in oils, only some 20 cm wide. As I was painting the earthy color combination I had imagined, I found it looked rather oppresive. All the colors were a bit too similar and with all that dust dominating the scene it felt clausthrophobic, as if the animals were inside a huge room rather than outdoors. So I decided to bring in the color that most directly contrasts with orange: blue. Incorporating the patch of blue sky in the right upper corner of the painting created a tension between two complementary colors and it further suggested the idea of advance, so that as the herd moves towards the right side of the scene the dust seems to be cornering the blue sky, but it hasn’t totally happened yet.

Here is the rough color sketch, painted in oils

I solved these issues in an hour or two working on my small sketch. But if I had set to paint directly on the big canvas (shown below) and found these problems along the way, the solution would have taken much more time, a luxury I could not afford in that project.

Here is the finished oil painting 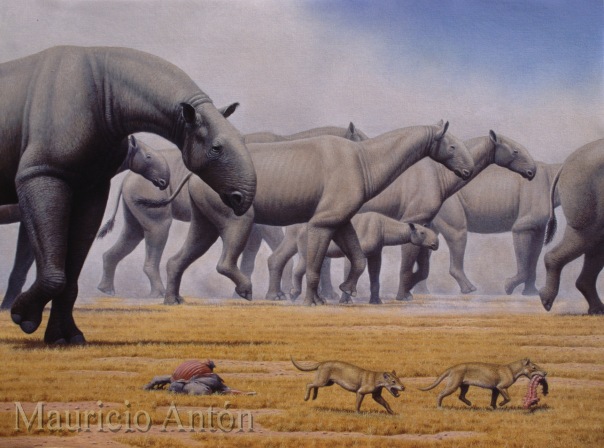 Posted on 16/08/2017, in Uncategorized. Bookmark the permalink. Leave a comment.